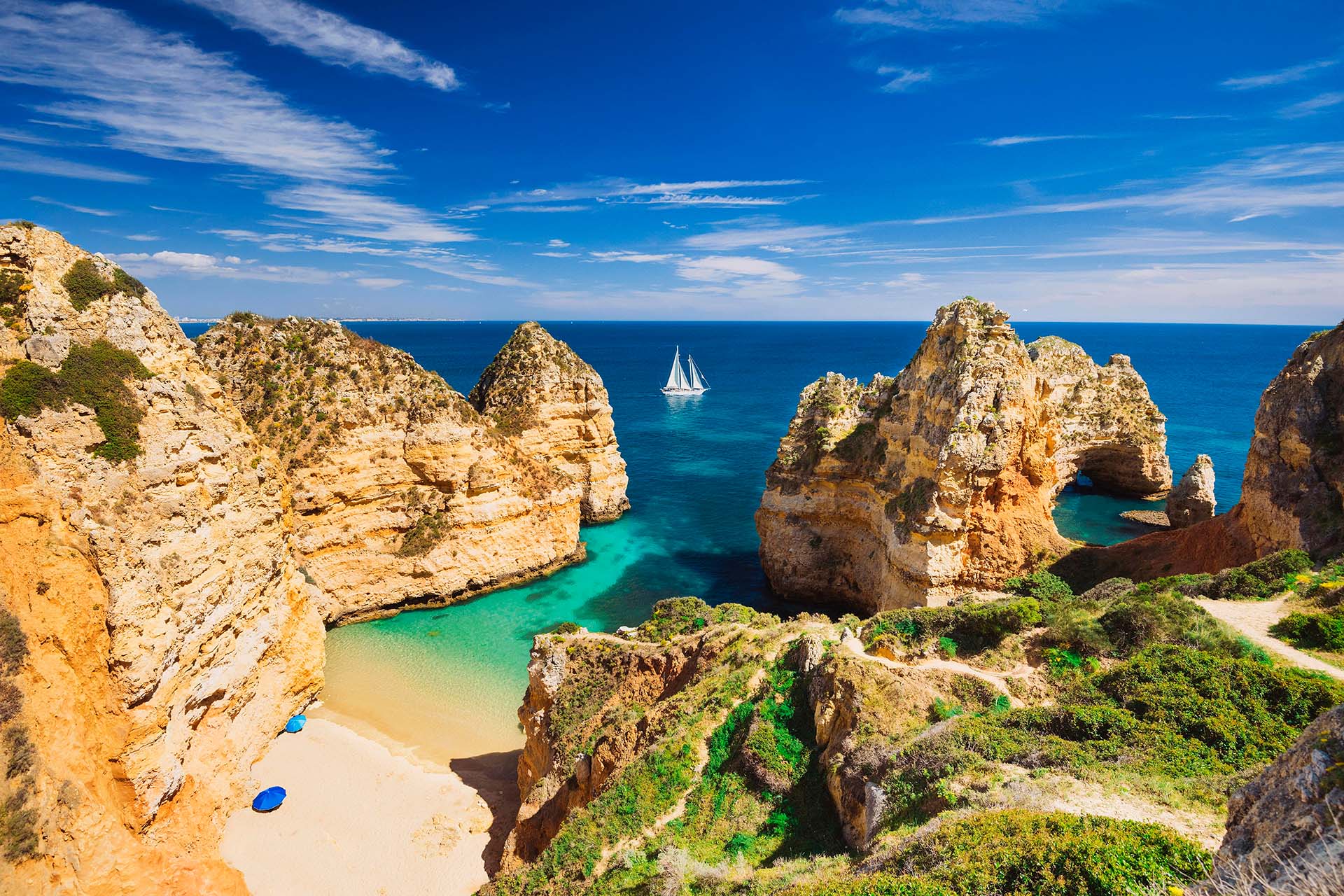 Going to the Algarve, a region in southern Portugal, means enjoying at least 300 days of sunshine a year and also having the choice between a multitude of beaches, with different characters. Visiting the Algarve also means discovering the westernmost region of the European continent, the last stage before the Atlantic Ocean, a region where cultures have intermingled since the dawn of time.

On the 155 km of coast with various configurations, you can surf at Odeceixe, in the far north, snorkel at the beach of Porto de Mos, near Lagos, or simply stretch out on the fine sand and swim in the crystal clear waters. , everywhere along the coast.

The beaches of Barril, near Tavira to the east, Bordeira to the west, Ponta de Piedade and its small coves, the immense sandy beach of the island of Faro or that of Falesia are among the most beautiful beaches in Portugal.

The presence also of the Ria Formosa natural park, a real protected natural area over approximately 60 km in length and 270 m², from Faro to the Spanish border, and protected by an alignment of five islands including those of Farol, Armona , or the Ilha Deserta is also a major asset of the region. With the Environmental Education Center of Marim (Centro de Educação Ambiental de Marim) you can take a 3 km circular hike that crosses several ecosystems (dunes, salt marshes, pine forests) and where you can see migratory birds (spring and autumn ), a tide mill and an old tuna fishing boat. Another hike (Trilho de São Lourenço – 3 km round trip) starts at the parking lot of Quinta do Lago beach and will allow you to discover freshwater lakes, a salting pond from Roman times as well as many species of birds (depending on the season) such as the flamingo.

The indented coastlines of the Algarve are not only home to beaches, but also stunning rock formations, such as the ocher cliffs of Vilamoura at Praia do Barranco, near Olhos de Agua.
Along the coastline there are also great opportunities to explore caves. Benagil is often on lists of the most beautiful beaches in the world and can therefore be too crowded, but there are many others, such as Zorreira, Algar Seco or the Cave of the Combs, to the west.
You can explore these caves by walking on the beaches or during a boat or kayak trip.

The capital of the Algarve, Faro, has a very authentic atmosphere with more local life than most tourist-crowded towns on the coast. It has a pretty marina, well-maintained parks and squares, and a historic old town full of pedestrian streets and terraces. Faro is a city full of history and culture with its wonderfully well preserved medieval quarters. Part of the city is still surrounded by walls that once protected the city. Inside the walls there is the main square, the cathedral dating from the 13th century and the archaeological museum of the city. More in the center of the city, the Igreja do Carmo and its chapel of bones is a place to visit absolutely.

To the east of Faro, there is the city of Olhao, a cubist city with its magnificent covered markets on the edge of the lagoon. Still about twenty kilometers away, Tavira is one of the towns that has kept its soul and its certain southern town style. Vila Real de Santo Antonio is the last town before Andalusia.

On the west side, 18 km from Albufeira, the most touristic resort in the Algarve, a little away from the road, a pretty white village away from the hustle and bustle of the coast, Alcantarilha. The next small seaside resort on the coast is located between two ocher cliffs, Carvoeiro, a former fishing village known for its very lively beach. At the same height, but inland, Silvès, the former Moorish capital, has preserved beautiful vestiges of its Arab past, while the small perched village of Querença delights us with its white houses and jagged chimneys.
90 kms from Faro, the last big city west of Lagos, before Sagrès the most southerly point in Europe, Cape St Vincent.

However, the hinterland should not be overlooked. The mountains also feature prominently and lend themselves to many hikes. Many trails to follow on foot or by bike have been marked, the shortest is 3 km and the longest 340! The Rota Vicentina goes from Cabo de São Vicente to Santiago do Cacém, but you can choose to do only part of it. The Via Algarviana goes from village to village, between sea and mountains, on the southern coast of the Algarve.

The proximity to the sea makes it possible to bring a number of fresh and delicious products to the plates. Fresh fish and seafood, grilled or in “cataplanas” (prepared in a typical copper utensil) reign supreme. Divine flavors that you can enjoy on a simple terrace on the beach, or in more refined Michelin-starred restaurants, where chefs reinterpret traditional gastronomy.
Thanks to the presence of several renowned Portuguese chefs who have opened their restaurants there, Faro is an important culinary stopover in the Algarve: Rui Sequeira and the Alameda restaurant, chef Leonel Pereira at the Check in restaurant, Adérito Almeida at the Habito restaurant.